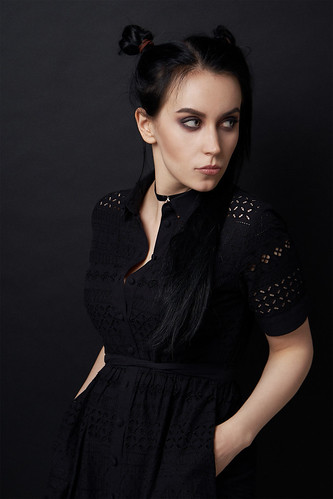 Studio equipment used:
1 light source – PROFOTO D1 500 Air, key light with Profoto RFi Octa 4′ 120см light modifier left-front to the model, the whole scene was syncronized with PROFOTO Air remote commander used on camera, black paper background – approx. 1 – 1.5 meters behind the model
***
While I’m looking for my next 85mm prime, we organized photoshot with Ksenia.
This time we were looking for inspiration in "The Addams Family" – 3D CGI-animated supernatural black comedy horror film and in "The Joker" – American psychological thriller film.
In relation to the first movie, we decided to make something in Morticia Addams style, while for second one we were trying to make joker as if he was a girl.
Frankly, our attempt to shot Joker character misarebly failed, regardless the fact that we were organizing it carefully. Because we started with a first one and spend almost one hour to shoot it, after we finished it was needed to change makeup and we simply ran out of time to shoot Joker character with a proper mood. In last 15 minutes we tried to save situation but Ksenia was already exausted with her attempts to switch to more serious psychological/drama Joker character.
Some images from Morticia style I’m planning to post here. Feel free to comment on the first one.
BTW, your suggestion on what 85mm to buy are highly appreciated. ATM I’m choosing between Zeiss Batis and new Sony FE, both f/1.8
(the reason why I don’t want to buy G master or Sigma Art is because of their weight)
***
Md & MUA: Ksenia (@grey.ks)
Ph & retouch: mine
***
Date: January 26, 2020
Camera: Sony a7 iii (ILCE7M3)
Lens: Sony 28-70mm f/3.5-5.6 OSS
Exposure: 1/200 at f/5.6, 70mm, ISO 200

Free Shipping on All Orders $99 or More

Are You a WUPPLES® Affiliate?

What are you waiting for :)
WUPPLES® affiliates earn 35% commissions per sale and so can you!  (sign up below)
Bonus:  Receive free ($197 value) tips & training on affiliate marketing when you become a WUPPLES® affiliate.  Congratulations!

Powered by Convert Plus

The Best Halloween Fashion. Period.™
Sign up below for an exclusive coupon code you can use instantly on your first purchase :)
This is a limited time offer

Want to Win the Car of Your Dreams?

Want to be the Next MicroCap Millionaire?
(Don't Miss This!)

on your first purchase